I am grateful to Árni Sigurðsson for introducing me to the conversations between Romain Rolland and Sigmund Freud. Rolland was a French dramatist, novelist, essayist, art historian and mystic who was awarded the Nobel Prize for Literature in 1915. He was also  strongly influenced by the Vedanta philosophy of India, primarily through the works of Swami Vivekananda, and he shared his experiences in a series of letters to Freud. 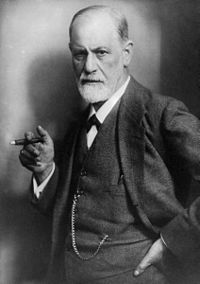 Consequently, the first chapter of Freud’s 1929 book “Civilization And Its Discontents” speaks of Rolland’s feeling of oneness with the universe. Freud then goes on to try to explain it in terms of ego.

He starts by talking about Rolland’s sense of oneness with the universe.

This was a particular feeling of which he himself was never free, which he had found confirmed by many others and which he assumed was shared by millions, a feeling that he was inclined to call a sense of ‘eternity’, a feeling of something limitless, unbounded – as it were ‘oceanic’. This feeling was a purely subjective fact, not an article of faith; no assurance of personal immortality attached to it, but it was the source of the religious energy that was seized upon by the various churches and religious systems, directed into particular channels and certainly consumed by them. On the basis of this oceanic feeling alone one was entitled to call oneself religious, even if one rejected every belief and illusion.

The universe is, by definition, eternal (because time started with the creation of the universe) and infinite (because all of space is contained within this universe), and because each of us is this entire universe, we too are eternal and infinite.

It is a feeling, then, of being indissolubly bound up with and belonging to the whole of the world outside oneself.

Normally we are sure of nothing so much as a sense of self, of our own ego. This ego appears to us autonomous,   uniform and clearly set off against everything else. It was psychoanalytic research that first taught us that this was a delusion, that in face the ego extends inwards, with no clear boundary, into an unconscious psychical entity that we call the id, and for which it serves, so to speak, as a façade.

I think a whole bunch of gurus and zen masters worked out that the ego was an illusion many centuries before Freud developed psychoanalysis, but hey, let’s not pick his ego apart. 🙂

The new-born child does not at first separate his ego from an outside world that is the source of the feelings flowing towards him. He gradually learns to do this, prompted by various stimuli. It must make the strongest impression on him that some sources of stimulation, which he will later recognise as his own physical organs, can convey sensations to him at any time, while other things – including what he most craves, his mother’s breast – are temporarily removed from him and can be summoned back only be a cry for help. In this way the ego is for the first time confronted with an ‘object’, something that exists ‘out there’ and can be forced to manifest itself only through a particular action.

That seems to me like a pretty clear explanation for how the this of duality develops in a child. When we are born, before the pre-frontal cortex has finished developing, there is no sense of “me” or “not me”. There is only “everything”, being uniformly witnessed in the moment. Hunger comes and goes. Laughter comes and goes. There is no worry, no anger, no anxiety, no stress. Only being in the moment. Once the conscious mind develops, and we learn the concepts of “me” and “not me” (in other words, the ego), these negative emotions develop also.

We learn how to distinguish between the internal, which belongs to the ego, and the external, which comes from the world outside, through deliberate control of our sensory activity and appropriate muscular action.

In this way, then, the ego detaches itself from the external world. Or, to put it more correctly, the ego is originally all-inclusive, but later it separates off an external world from itself. Our present sense of self is thus only a shrunken residue of a far more comprehensive, indeed all-embracing feeling, which corresponded to a more intimate bond between the ego and the world around it. If we may assume that his primary sense of self has survived, to a greater or lesser extent, in the mental life of many people, it would coexist, as a kind of counterpart  with the narrower, more sharply defined sense of self belonging to the years of maturity, and the ideational content appropriate to it would be precisely those notions of limitlessness and oneness with the universe – the very notions used by my friend to elucidate the ‘oceanic’ feeling.

For my money, this is a pretty good articulation of non-duality from Freud who also says in this chapter that he, personally, does not have the oceanic experience, although I would argue that we *all* have it as it is our original nature (as Freud himself points out in the book). We all have it – it’s just that for most people, the oceanic experience is drowned out by the chattering of the pre-frontal cortex, the monkey mind, and it’s concepts about “me” and “not me”. The quiet sense of oneness lies underneath the monkey mind, always watching, listening, accepting, staying in the moment.

We have all experienced this now and then – when playing a great game of chess, or doing yoga, or playing violin – and we notice that the chatter has stopped for a while, that we are in “the zone” or “flow”, just being NOW and DOING, without thinking about it or about ourselves.

That is the state that some of us live in permanently. And you can too.